If you’ve seen the film Saving Mr Banks, you’ll know that Australian author P L Travers was very reluctant for her work to have the Disney treatment. She was right to be worried, as the resulting adaptation was rather different to the book. On the plus side, we have an iconic and award-winning musical film (one of my favourites – there goes my street cred!), known for its much-parodied Sherman Brothers songs, combination of live action and animation, excellent performances from Julie Andrews and David Tomlinson, and of course the dodgy accent of Dick Van Dyke.

Both the book (first published in 1934) and the film share the concept of a mysterious nanny who brings magic to the family at Number 17 Cherry Tree Lane. However, there are few other similarities. The film is set in 1910 instead of contemporary times and has a greater emphasis on Mr Banks (preoccupied by his work, with little time for the children), Mrs Banks (who has become a suffragette and magically acquired a personality) and chimney sweep / artist / musician Bert (who in the book appears in only one chapter, as a match-selling man with a sideline in pavement drawings). Mary Poppins is here responsible for bringing the estranged family back together again. The character of Mary is fascinating, a seemingly no-nonsense, self-confident figure who has fantastic adventures but pretends they never happened. Her film counterpart is a little more glamorous and more likeable.

It’s fortunate that the film has a sense of direction and resolution that the book is lacking. The book is whimsical (reflected in the film) but becomes odder towards the end, including Mary Poppins’ birthday party at the zoo, where people are in the cages instead of animals, and Mary turns out to be the cousin of a snake. That wouldn’t have been quite Disney enough.

My two absolute favourite characters in the film, Bert and Mr Banks, are so minimal in the book. For this reason I think the film is better than the book, as far as we can compare the two kinds of media. Of course we have P L Travers to thank for the character of Mary Poppins, but really the Disneyfication of the story improved it vastly. 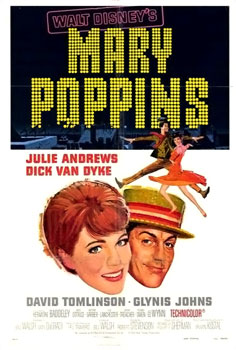